If you've ever traveled internationally and used a credit card, odds are at some point you've been asked if you'd rather pay in the local currency, or in your home currency.

Being charged in your home currency - or "Dynamic Currency Conversion" (DDC) as it's called - sounds like a good idea, especially if you've using a credit card that charges extra for foreign currency charges, but in practice it's very rarely (if ever) a good idea.

To see why, lets look at a few examples of transactions I've had over the past few months where I was offered DCC.

Booking a train in China : 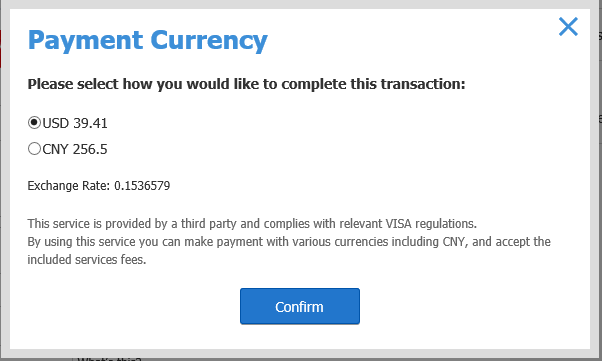 Using this exchange rate gives a US$ price of $37.88, around 4% lower than the US$ price offered by the website when using DCC!

Many credit cards today offer no fee for foreign dollar transactions, and I used one of those cards. Checking my credit card statement for this charge shows something almost exactly the same as was obtained using the OANDA rate :

So what I was charged was basically a rounding error on the calculated rate - and thus a full 4% less than I would have been had I selected to be charged in my home currency of USD.

The one situations where DCC may appear to be a good idea is if you have a credit card that charges a fee for foreign transactions. In most cases these fees are in the 2-4% range, so for the example about it would have basically been a wash - 4% for the DCC, or 4% for the foreign transaction fee.

However if we look at a few more examples : 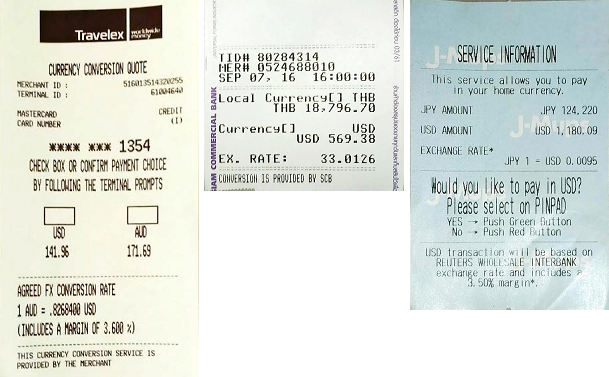 For the first one of these the USD rate is $141.96 (if using DCC), however my credit card company converted this one as US$131.46 - that's a difference $10.50, or almost exactly 8%. Note that the receipt claims a fee of 3.6%, so where did the rest of the 8% come from? Likely a very poor exchange rate being used - well below what my credit card company used for the same charge.

With some credit card providers there is a further complicating factor when it comes to these calculations. Historically the foreign transaction fees charged by credit cards were only charged when the transaction was in a foreign currency - regardless of where the transaction took place. Thus using DCC to charge in the currency of the card avoided these charges.

However some banks, including many in Australia, have changed their fees several years ago to charge a "Foreign Transaction Fee" for all foreign transactions - regardless of what currency it is charged in. This means that you'll be hit with the ~3% foreign transaction charge even when DCC was used!

For example, Westpac in Australia defines a foreign transaction as :

Thus a transaction in the USA, charged in Australian dollars (including the 3-8% DCC overhead) would still be charged an additional 3% foreign transaction fee by the bank!